One App to support them all...

In the fight against the bee parasite Varroa Destructor there is a new, easy and effective weapon to support state of the art therapies.

Without periodical counting of dead mites, which fall down into trays on bottom of bee hives, it is difficult to determine optimal points in time for counter measures. This is true for chemical and thermal therapies.

The damages - direct and indirect - are considerable. The overall economic performance of bees for pollination to produce food for mankind was estimated to about € 153 billion per year. *)

Damages due to bee extinction have been estimated up to about € 300 billion worldwide. **)

The Problem
The Idea
Smart

Time is money. Who has time to waste?

average duration of a

our goal: duration of a
Varroa Counter estimation

The global occurence of infestation.

Critical progressions were observed in US (30%), Europe (up to 53%), near East (up to 85%) and Japan (20% sudden losses)[Neumann and Carreck, 2010]. Due to the trend to milder winters breeding stops cease and the mites spawn all-season. However, some bee species seem to be more resistant than others.
The world map below gives a simplified impression of infestation based on latest research at University of Florida (UFL).

Damages vary locally and from year to year and reach from low percentages up to total loss. The system behind is complex and there still is no comprehensive theory for explanation.

Varroa Counter is a helping tool for a global problem

Our first official version of the Varroa Counter is very promising and we know that there is further work to do. We plan to integrate new features for hive management and know that the data generated is of unique, standardized quality and an added value for research.

Varroa Counter helps to fully understand all aspects of interaction with other bee diseases and environmental impacts on bee colonies around the globe. With your help we will come closer to this goal!

Join the circle of supporters, who bring our idea ahead. With a little contribution
supporters help us to strengthen our campaigns and activities for strategic cooperation, marketing and product development.

No counting and no treatment are no options!

... and while preparing for the next season we look back to last year. A first open beta version of the #VarroaCounter was introduced in... 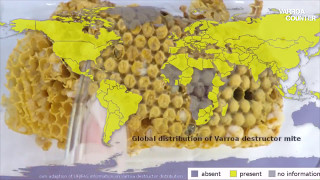 The Varroa Counter in one minute (en)

After the App has startet you are at the Home Screen. From here you can get further informations about the App's features, define your...

Enter the dimensions of your bee hive trays. It is possible that bee keepers own different kinds of bee hives. Therefore each hive...

You start the estimation process with taking a photograph. Use the checkbox (top right) to enable or disable spirit-level support. If it...

After the photo was taken, the image is cropped to the bee hive frame. Now it's time to investigate its quality. You can zoom an pan to...
Features

Our product is just the begin ...

... on the endevour towards smart bee hive management with Artificial Intelligece.